Aza is a high school student who struggles with severe OCD (she constantly worries that C.Diff is going to kill her). She must fight against her own mind and help her friend Daisy find a fugitive billionaire and claim her reward. Oh, John Green, how I love to hate you. I told myself there was no way on earth that I would ever read another John Green book.  Then I found out that ‘Turtles All the Way Down’ is about OCD. I’ve had severe OCD since I was a child so here we are.   I’m going to separate this review in two separate areas. First a general review and secondly how well Green paints an accurate picture of OCD.   First the Book In General: John Green is the master of writing a book that’s easy to read. All […]

I recently read ‘An Abundance of Katherine’s’ and I just did not get the story line, or the book at all for that matter. For me ‘Looking for Alaska’ was more of the same. A quick read and  somewhat interesting, in parts, but it lacks depth and originality. I don’t know. Maybe, I’m too far in the middle of generation X to understand Green’s writing style. I mean, I used to be somewhat of a John Green fan. I did kind of like ‘Fault in Our Stars’ but come on ‘Paper Towns’ and ‘An Abundance of Katherine’s’ has almost the same plot as ‘Looking for Alaska’ (i.e. nerdy and extremely intelligent boy has teenage angst for a girl who is not interested). The main characters from the three books, Miles/Colin/Q  and  Alaska/Katherine/Margo are basically all the same people. Green also […]

Posted May 13, 2016 by Karen in Books An Abundance of Katherines, John Green, YA, young adult/ 2 Comments 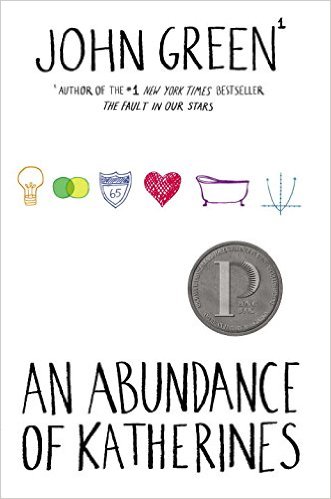 Colin Singleton is a child prodigy, who has been dumped by 19, yes that’s 19, girls named Katherine. He is so depressed when he is dumped by Katherine nineteen, his friend Hassan talks him into going on a road trip. They end up in Gutshot, Tennessee visiting the grave of Archduke Franz Ferdinand. Ok, I’ll start off by saying a few years ago, my first John Green book was ‘Fault in Our Stars’ . I thought it was reasonably good but did not live up to the hype. Then I read ‘Paper Towns’. Let’s just say it has some not very nice quotes about Orlando and those of us who live here ( I heard they left those quotes out of the movie, so I must not be the only one that found the quotes not very nice).  I also […]